A modern style of living, security, peacefulness, relaxation and wellbeing are the hallmarks of the Mabna 7 project. Use of up-to-date and modern materials such as Knauf and Aquapanel, which are among dry construction materials, to build all parts of the façade, all exterior walls and the ceilings. Aquapanels are cement panels which have the following advantages: complete resistance to water and repeated cycles of freezing and thawing, flexibility and bendability, lightness and thinness, which reduces the load, soundproof, fire-resistance. Mabna 7 project contains four 15-unit building(60 units in all), each block with a separate entrance lobby and access to separate staircases and lifts. There are three types of apartment with areas of 105,145, 150 square meters with two or three bedrooms, one of which is a master bedroom. Amenities such as separate entrance lobby for each block, separate lift for each block, a floor lobby for each three units, fire alarm and extinguishing system, great landscaping, CCTV, a modern façade, and great natural lighting are the outstanding characteristics of this project. 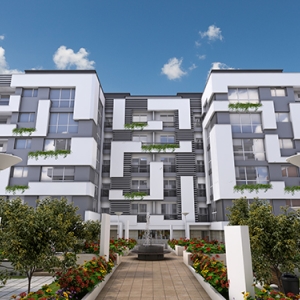